The impact of the corona pandemic is felt across all aspects of life and all parts of the economy. However, contrary to most sectors, the mood in the German wind industry has improved slightly in spring of 2020 despite an unchanged political environment. Germany is seeing an end to the negative trend that was evident in the previous trend:index surveys, showing improved market assessments in the wind industry for both 2020 and the next two years. In the international wind market, assessments of the current mood in the onshore and offshore wind industry are largely positive, if slightly down from previous surveys. Expectations for the coming years are markedly more optimistic, however, with the market development mostly receiving more positive marks indicating an upward trend, and additional potential being perceived in the progressing digitalisation and the uptake of green hydrogen.

These are the results of the new WindEnergy trend:index (WEtix), which is prepared jointly by WindEnergy Hamburg, the global onshore and offshore wind energy event, and wind:research, the leading market research institute for wind energy. The global WEtix survey has been gauging the mood in the wind industry every six months since 2018. More than 1,100 market players participated in the fifth survey in March and April 2020.

Since the spring 2020 survey was designed and developed prior to the implementation of the comprehensive lockdown measures in response to the coronavirus crisis, and since it was deemed important to avoid compromising its comparability with previous surveys – acknowledging that the ‘corona’ effect is likely unique (even if it persists for a while), – this WEtix purposely contains no questions specifically referring to the coronavirus. It should be noted nevertheless that the survey was conducted from 17 March until 29 April 2020, a time during which the spread of the COVID-19 virus was affecting much of the world already. This makes it very likely that some answers where influenced by the coronavirus crisis.

The trend reverses in Germany: Market situation assessments slightly more optimistic
In Germany the negative trend prevailing over the past two years has stopped. It should be noted nevertheless that the survey was conducted from 17 March until 29 April 2020, a time during which the spread of the COVID-19 virus was affecting much of the world already After the assessments of the German wind industry in the November 2019 WEtix yielded new record lows, the current mood as well as the future prospects in the market are now seen in a more positive light. While the situation in both the onshore and the offshore wind markets is still in the negative range, there is a slight recovery. Considering the actual improvements, which remain marginal, this development is remarkable because it runs contrary to the trend in the world regions, all of which show declining values in the 2020 mood assessments.

Expectations for the development of the onshore wind industry in Germany over the coming two years are much more positive while still remaining in the negative quadrant. The mood in the German offshore wind industry has clearly improved, as well.

"From the perspective of many market participants, things cannot possibly get any worse than they were in 2019. This is reflected in the numbers. But the fact that the general outlook remains below the zero line shows that hopes in the current federal government are subdued. The current coalition government could still surprise the industry with some positive measures. This would require a strong emphasis within the economic stimulus package. If the federal government takes decisive action now to eliminate the well-known barriers, the wind industry can play a significant role in supporting the post-corona relaunch of the economy while lending credibility to the Chancellor's ambitious climate protection goals. In the absence of such decisions, however, our only hope will be quick government action after the next federal elections. What unites us is the notion that the wind industry is of essential importance," said Hermann Albers, President of the German wind energy association PWE, assessing the current situation.

The mood in the international wind market: Subdued in the short term, but optimistic for the future
Looking at the current year, industry stakeholders take a less optimistic outlook on the international onshore wind energy market than in previous surveys. While the market situation in North America and Asia still receives positive marks despite some metrics revealing a significant decline, the results for Europe have dipped down into the negative range for the first time. On the other hand, expectations for the development of the onshore wind industry over the coming two years are much more positive, with a slightly above-average upward trend for Europe and North America.

As for the global market situation in the offshore wind industry, the picture looks quite similar: while the mood for the current year remains positive for Europe, North America and Asia, all regions are trending downwards, some quite steeply. The trend in the offshore wind industry in North America, Asia and the rest of the world continues to receive positive assessments for the next two years, and the European markets are increasingly receiving optimistic marks, as well.

Green hydrogen of great importance for the future of wind energy
More than half of respondents believe it is likely or very likely that the production of green hydrogen will play a key role for wind energy over the next three years.

WindEnergy Hamburg from1 to 4 December 2020
Every two years one of the most fascinating industries meets for the leading global networking event for wind energy: At WindEnergy Hamburg, situated right in the heart of the vibrant northern German port city, 1,400 exhibitors will present their innovations and solutions. The event has a highly international profile, with half of exhibitors hailing from abroad. Leading suppliers of system components for all stages of the onshore and offshore wind energy value chain will provide a comprehensive overview of the market. Around 600 service providers offering everything from planning and project design to installation, operation and maintenance, and through to marketing, certification and financing will complete the picture.

The Who's Who of the wind industry, including representatives of trade associations, the science community and politics, will be present. The Expo will be accompanied by WindEurope's high-profile conference programme focusing on the industry's current key topics: Hydrogen & Electrification, Global Business, and Safety (human & cyber). GWEC, Global Partner of the event, will provide global business insights. Originally scheduled to take place from 22 to 25 September 2020, WindEnergy Hamburg 2020 has been postponed because of the coronavirus pandemic. It will now be held from 1 to 4 December 2020.

About wind:research:
The market research institute wind:research prepares market studies and analyses as well as expert reports, through to M&A services for the wind energy sector, delivering detailed insights for strategy development to energy utilities, project developers, operators, component and turbine manufacturers as well as municipal, state and federal governments.

About the survey:
The global WEtix survey has been gauging the mood in the wind industry at six-month intervals since 2018. More than 1,100 market players participated in the fifth survey in March and April 2020.

See Figure 3: Overview of the survey period, participants and proportion of 100per cent completed surveys

The survey respondents’ activities primarily focus on the onshore segment, which delivered roughly three times as many responses as offshore. About 40% of respondents are active in both market segments, which is consistent with the distribution identified by recent research. Nearly half of responding companies engage in operation and maintenance activities. Furthermore, around 40% participate in project development; more than one third are manufacturers, and about one fourth perform installation work. Activities within manufacturing are mostly focused on making turbines, rotor blades and other components. Around 30% of respondents focus on the German market and the European market, respectively.About 15% of respondents are also active in the Asian and the North American markets. More than one third of respondents hold a managerial position, followed by respondents from sales, ‘other’, R&D and design as well as maintenance and service functions. As in previous years, the WEtix survey is highly representative, with more than 1,100 market players participating. The distribution of response rates across countries and regions largely corresponds to the relevant market volume. 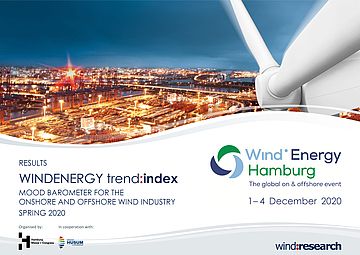